History of the School

Dauntsey's School was founded in West Lavington, Wiltshire, in 1542, under the will of Alderman William Dauntesey, Master of the Worshipful Company of Mercers.

"I William Dauntesey Citizen and Alderman of the Cities of London... will that in West Lavington a house called a church house and a house for a schole be kept... and that Ambrose Dauntesey shall name and appoint one apt and convenient person to teach gramer in the Schole house..."

From these humble beginnings over four and a half centuries ago, Dauntsey's has grown into a thriving, modern co-educational school with more than 800 pupils, with continued links with the Mercers' Company.

William Dauntsey, born in Wiltshire in 1483, was the youngest son of four, and went to London at an early age to try his fortune in trade. There he was apprenticed to William Lambert, Master of The Mercers' Company, and completed his apprenticeship in 1504. He was elected Master of the Mercers' in 1531, and became an extremely prosperous man, making frequent purchases of lands and houses in Wiltshire, London and elsewhere. On 10th March 1542, he signed the will by which The Mercers' Company later received his London properties, with the obligation to maintain the School and Almshouses which his executors were to build in West Lavington.

Not a great deal is known about the School from its beginnings in the 16th century until the late 1800s. The School was actually started in 1553 in the old building, which still stands opposite the Church in the High Street of West Lavington. The first master was named Adam Waters 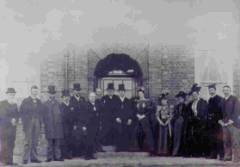 In 1878, dissatisfaction was growing about the School, probably against the background of rising awareness of the importance of education. A group calling themselves 'The Memorialists' submitted a list of complaints about the running of the School, and they were supported by the Leader of the Commons, W.H. Smith - a household name now - who delivered a powerful speech on their behalf in the House in 1887.

Eventually, 17 years later, a new school came into being. Joseph Chamberlain, a radical MP, prevailed upon The Mercers' Company to make available a sum of money to establish an agricultural school. This was to offer opportunities suited to a rural area, for boys of all classes, since scholarships would be available for pupils from the local elementary school, though others would be required to pay fees of £30-£50 a year. Thus it was that the Dauntsey's Agricultural School came to be built and opened in 1895.

A full history of the school can be viewed here.

Please do come and visit us. We offer individual visits, group tours and Open Mornings.